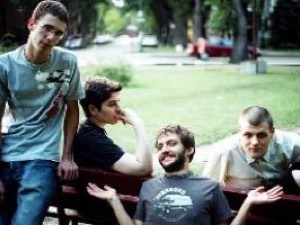 First of all, we've recorded our first full length album with Travis Saunders in Kelowna, BC. It sounds pretty friggin' awesome, if I do say so myself. Travis is just in the process of mixing it, so as soon as that and mastering are done, it'll be sent off to the pressing plant. It'll be 11 songs, all of which are listed on our website, as well as the lyrics. There's a title on there, but that may also change as we're thinking it's not as great as we thought. We're planning a tentative CD Release Party for July 24th at the West End, but it may be pushed back, so don't book that day off just yet.

Second, we've just signed our lives away with Spawner Records in Langley, BC (www.spawnerrecords.com). We're super excited to be working with our great Uncle Kyle for real, and we'll be proud as punch to slap a Spawner logo on our CD. Make sure you go check out their other bands, like Complete, theJohnsons, Far From Heroes, and Tim - they're all awesome. Kyle's also gonna be working our asses off, so expect more and more tours in the future after the CD is released.

Also, we've just be chosen to be part of Power 97 (www.power97.com)'s Class Of 2004 CD. We'll be playing at the Red River Ex sometime this month (I'll post it on the site as soon as I know), and we'll also be getting some regular rotation on Power 97, doing interviews, and stuff like that. The song they've chosen to play is Fallen, which will be on the new album, of course.

Our next tour is coming up faster than we can save up money to feed ourselves, but we've already booked a few dates. It'll start in September and be about 2 months long. We'll be going out west first, then back across this grand country of ours to the east coast, then back home to our miserable jobs. Make sure you come out and see a show when we're in your town.

And finally, we're getting a boatload of new merch in the next few weeks, including 3 new shirts, zip-up hoodies, and a boat full of crapload of new 1 1/4" pins. In about a month, we'll have an all new merch lineup, so come check it out. I'll be posting pics of all of it when it's back from the printers.

OK, I lied, that wasn't finally. Our contest is still going, but we now have an official deadline of May 30th. What can you win, you say? Well, the winner will get our new full length before anyone else in the world, as well as a shirt, pins, and a bunch of other stuff I can't remember and am too lazy to check. Go to our website at www.highfivedrive.com and check it out. Really, it's pretty rad.