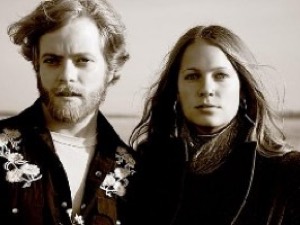 Brandy and Dave have a story that sounds like it's right out of a love ballad. They met unexpectedly at the 2002 Trout Forest Music Festival in a town called Ear Falls. After sharing songs around a late night campfire, they decided to forge a musical relationship, and romance soon followed. Since then they have collaborated, toured playing numerous venues and festivals and are now booked for this year's Winnipeg Folk Festival.