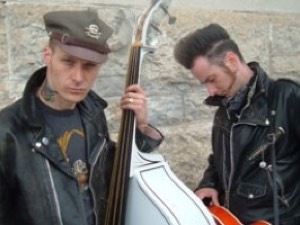 The Farrell Bros. have just signed to two different labels for the release of their upcoming full length album. For Canada, Teenage Rampage Records - a Punk label out of BC - and for the rest of the world, Raucous Records - a Psychobilly label out of London, England. The album is due to hit the streets sometime in early Spring, at which time the Bros. will be heading South for a short U.S. tour culminating in their appearance at the Viva Las Vegas Rockabilly Festival in Las Vegas. In other News, look for The Farrell Bros. on an upcoming Clash compilation out of the U.K.