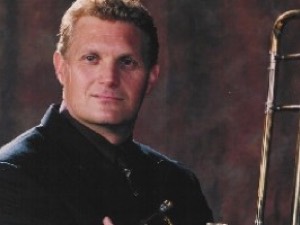 
Vocalist, Multi-Brass Instrumentalist Jay Harrison displayed his impressive talents and versatility while singing and performing on an incredible thirteen brass instruments during one, fifty-five minute show. Jay performed on the following instruments:

Joining Jay was stellar brass man, Frank Burke on trumpet, cornet, flugel and valve trombone, Ron Paley on keyboards, Cristien Lyons on acoustic bass and Jim Johnston on drums. Jay and Frank were surrounded by seventeen brass instruments which were played in a wide variety of styles and in numerous combinations. The majority of these instruments are vintage Jazz Horns and were built during the “Golden Age” of brass construction during the 20’s, 30’s, 40’s and 50’s.