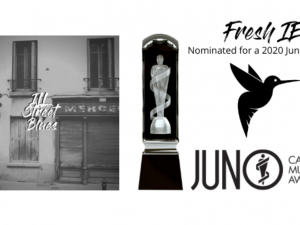 Fresh I.E.'s album Red Letterz has been nominated for Contemporary Christian/Gospel Album of the Year at the 2005 JUNO Awards. The rapper will be performing a few shows during the Juno weekend festivities:

Sunday, April 3
MTS Centre
As part of the Winnipe Tribute with Randy Bachman, Nathan, Chantal Kreviazuk, The Waking Eyes, The Wailin' Jennys and Burton Cummings for the 2005 JUNO Awards telecats, live on CTV at 8pm.