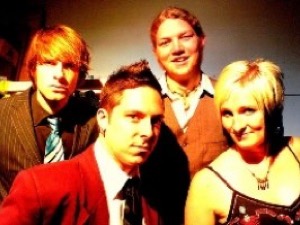 Hi everyone – With September here, and with the leaves already turning colour, we are revving up for some touring, showcasing and a lot of concert appearances before year’s end. At the end of September we are appearing at the SRSS Theatre in Steinbach, Manitoba. Show starts at 7pm and tickets are $16. For more information please contact: The Steinbach Arts Council: 204-346-1077 or email: sacarts@mts.net

In October we will be hitting the road to do a couple of ‘showcases’ in Alberta. First one is for the Alberta Touring Alliance on Oct 17 in Red Deer, AB, to be held at Red Deer College. The very next day we dart up to Edmonton to play a special Western Canadian Music Association showcase / concert with our friends Quinzy, Captain Tractor and of course Spirit of the West, who are to be inducted into the Hall of Fame the next day. A wristband to the WCMA festival buys you entry to this very special show, to be held at the McDougall United Church – apparently a place of worship by day which moonlights as a rocking music venue when the sun goes down!! This truly is a once-in-a-lifetime show. We are looking forward to it greatly and hope that you’ll attend.

November has us heading west once again. We will be appearing with ‘The Good Brothers’ in Alberta (please see our show schedule for deets) and then we are heading to the west coast again. Dates for those shows are being firmed up right now but you can expect to see us in Vancouver, Victoria, Qualicum Beach and perhaps a couple of other Vancouver Island destinations during that week or so. Stay tuned for announcements.

On December 12th & 13th we will proudly be participating in the 4th annual ‘Quinzmas’ show – this year to be held at the Park Theatre, in Winnipeg. We have been an integral part of the first three Quinzmasses, thanks to our dear friends ‘Quinzy’, and we look forward to a stellar production this year. Tickets, times and deets are yet to be announced but we will post them here as soon as the word comes down from on high.