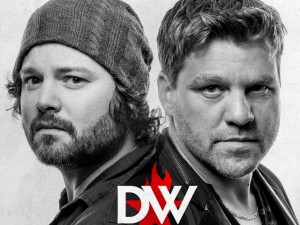 On July 20th Kelowna, BC will be treated to a very special free performance: Doc Walker's Dock Party - Live in Kelowna, at The Waterfront Park Island Stage. The band, Chris Thorsteinson, Dave Wasyliw and Murray Pulver are thrilled to offer the fans a free show and to be playing outdoors on the beach in beautiful Kelowna. In addition, CMT will be on site filming the performance for a live DVD and CD slated for release in the fall of 2010.
"We have spent a lot of time thinking about where we wanted to do this show and we couldn't think of a better location then Kelowna. The landscape, the beach, the mountains - we can't wait to get on that beach and play there! " says Thorsteinson. Wasyliw adds, "This is our first live DVD and we are psyched. We are going to take our fans on music journey of the last 8 years of our music and do some stuff that we've never done in a live show".
It's no coincidence that in their decade-plus time together Doc Walker have earned the title of 'the hardest working Country band in Canada' the old fashioned way, through relentless perseverance - constantly honing their chops as a song writing and a performing unit. Putting over a million miles behind them in Canada alone, in an effort to forge a lasting relationship with their audience.
Doc Walker's perseverance has netted the band multiple top-10 and top-5 hits on Canadian Radio and some of the Canadian Music Industry's highest awards, including six CCMAs in 2008 alone, as well as the 2009 JUNO Award for Country Recording of the Year for Beautiful Life, and a 2010 JUNO Award nomination in the same category for their current release Go. The real payoff for Doc Walker isn't the awards and accolades that come with their growing success. If anything, it's more accurately measured in a mutual dedication to each other, and to their audience.
The band's current single I'm Gonna Make You Love Me has climbed its way to # 4 on country radio, with the video reaching # 1 on Chevy Top 20 Countdown! Go, released last fall, has produced three top 10 hits including Coming Home and If I Fall.
Don't miss this very special free performance in Kelowna! Doc Walker's 'gonna make you love them' with a rockin' good time, pulling out all of their hits and there just may be some musical surprises too.