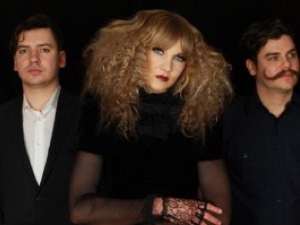 The debut album is called Surf Noir and the band is playing at the beach this weekend, but This Hisses isn't your typical summertime-fun music.
The Winnipeg band came up with the "surf noir" genre as a way to describe itself when all other descriptions failed. There isn't much surf guitar in the trio's sound, but the dark, post-punk-meets-garage rock vibe created by the group definitely fits the noir description.
"We didn't want to get locked into a genre, so we coined that term. We were arguing about what we could say about the style and (guitarist) Pat (Short) said, 'I think it sounds like surf noir.' Pat thought he invented that term, but we looked on the Internet and there are other bands using that description," vocalist-bassist Julia Ryckman says with a laugh.
The band -- Ryckman, Short and drummer JP Perron -- released its debut album at the Pyramid Cabaret on Saturday with a full production that included projections of specially made backing videos. They will get into the daylight on Saturday with a set at Islendingadagurinn in Gimli -- a fitting locale, since some of This Hisses music wouldn't sound out of place in a surrealist Guy Maddin feature like Tales from the Gimli Hospital.
"Even though we don't have the night sky and the darkness, we will still bring our esthetic and energy," says Ryckman, who counts herself as one-quarter Icelandic, based on her grandmother's heritage.
The cultural backgrounds of her bandmates wasn't discussed, but Ryckman, a veteran of the local scene, chose Short and Perron to form the project with her a year after her celebrated all-female rock group the Gorgon called it quits.
Although she continued to perform solo as Slattern and as a duo with Rob Vilar in Triunfo Do Gato, she had four unreleased Gorgon-era songs written she felt needed a full-band treatment.
She called up her future bandmates -- who have been part of groups such as Mahogany Frog, Dead Letters, Electric Candles and Under Pressure --15 months ago with the possibility of just jamming a bit and recording the songs, but after a couple of sessions together the three realized they should continue as a full-fledged group.
"We've all been in bands for so long, we have a good sense of what we want to do individually and figured out what we wanted our sound to be," Ryckman says. "We had a good sense right away of what we liked artistically and what we would do as a group."
Part of that is mixing in some delicate, pretty melodies to counter the band's dark side, ensuring there is a balance, Ryckman says.
And she should know what she's talking about.
The 31-year-old is a classically trained opera singer who has been studying the Italian method with local instructors Diane Berger and Valdine Anderson for 19 years. There was even a time when Ryckman considered pursuing opera as a career, but heavy competition among female vocalists and her love of rock music ensured it stayed a hobby and labour of love.
Needless to say, she is a standout vocalist who possesses a unique voice in the local music scene.
"I love studying opera but this I what I like to do, and I like taking what I know about classical music and making it contemporary," she says. "Even to sing rock music you need to have technique. I really feel classical singing technique is the best, and within classic music I think the Italian method is the best: it goes back hundreds and hundreds of years."
People heading up to Gimli for the 122nd annual Islendingadagurinn can see for themselves when This Hisses plays a free show at The Pier Saturday on a bill that includes Yoyote, the Liptonians and Royal Canoe.
Here is the complete evening musical lineup at this year's Icelandic Festival. All shows are free except where noted:
Friday, Islendingarock, Lakeview Resort Harbour Stage, 7:30 p.m. Noble Thiefs, Goldenboy, Inward Eye (replacing Attica Riots).
Saturday, Saturday Night @ The Pier, 8 p.m. Yoyote, This Hisses, Liptonians, Royal Canoe.
Saturday, Music on the Rooftop, Johnson Hall, Waterfront Centre, 7:30 p.m. Bjorn Thoroddsen, Richard Gillis, Gilles Fournier, Will Bonness, Aurora Peiluck, Carly Welham, Teegan Walker, Sean Irvine, Marco Antonio Fiore, Allana Fast, Peter Frejek. Admission $15.
Sunday, Alternative Folk Festival, 6:30 p.m. Ingrid Gatin, Zachary Lucky, Nathan, Romi Mayes, Andrew Neville & the Poor Choices.
Sunday, Tom Jackson, Gimli Composite High School gym. With Ari Jakobson. Admission $20.
-- -- --
Islendingadagurinn isn't the only place to hear music this weekend, of course.
If classic rock 'n' roll is more your thing, then Minnedosa is the place to be.
The annual Rockin' the Fields of Minnedosa music festival begins today and runs through Sunday with more than 20 bands playing over the course of the four-day event. Headliners include Tom Cochrane, Big Sugar, Prism, Sass Jordan and the Sheepdogs.
Weekend passes are $150 plus $50 for camping.
Over in Kenora, the city's annual Harbourfest features three different theme nights of music. Friday is classic-rock/crazy-hair night with Kenny Shields & Streetheart, Aldo Nova, Honeymoon Suite and A Flock of Seagulls (really) sharing the stage. Saturday is geared toward the country/party crowd with Doc Walker and Big Boogaloo, while Sunday features an all-Canadian rock lineup of Sloan, the Watchmen and Ian Thornley & Big Wreck. Tickets for Friday and Sunday are $59, while Saturday is $34 at harbourfest.ca, Donny B's, Nibblers Nook and Two Bears Marina.
rob.williams@freepress.mb.ca
Republished from the Winnipeg Free Press print edition July 28, 2011 E9