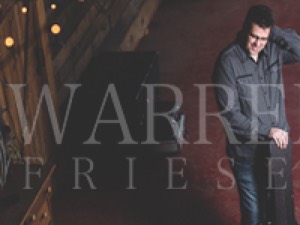 After releasing his first album Where Wheat Grew Tall last August, Warren Friesen has quickly risen to southern Manitoba fame, playing in local events and making it on the radio for CFAM’s Made in Manitoba segment. “As a young boy, I remember spending hours lying beside our huge cabinet record-player trying to emulate my musical heroes,” says Friesen, some of those heroes being Bob Segar, Elton John, The Eagles, and Neil Young. “But despite my early love-affair with music, I really only began singing in public at the age of twenty-three.” It was at his sister’s wedding that Friesen had his first public performance and he hasn’t looked back since then. Friesen blends a “little country, folk, blues and rock” to create his homemade Manitoba sound.