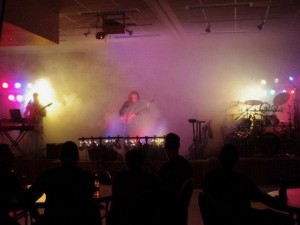 Winnipeg progressive rock trio Providence has released their first official music video fror The Wheel/ Zeta, from their debut album, The Demon Haunted World.  The release coincided with the first anniversary release of the album.

The lyrics speak of communications technology, and how it shapes our beliefs, opinions, and decisions. "who controls your eyes, controls your minds" - Timothy Leary

The Demon Haunted World is our debut album. It's a concept album that echos the concepts talked about by Carl Sagan in his book titled, "The Demon-Haunted World: Science as a Candle In The Dark" Sagan speaks of civilization reaching great technological heights, but with so few understanding the science behind them. We fully rely on science and technology to live, but we embrace pseudoscience and superstition. We have forgotten how to be critical thinkers.

The album was released on November of 2019, just before the worldwide COVID-19 pandemic changed how we live. The band had planned shows to support our new release, but everything had to stop. Unable to rehearse, jam, or film live shows, a decision was made to at least offer a video to compliment the final tracks on PROVIDENCE - The Demon Haunted World.

We hope you will enjoy the music and the video. There will be more videos to come.

The video was produced at Studio Irrenhaus, and released on the SDR label.