Let the countdown begin. Canada’s music awards are returning to the centre of the country and Manitoba’s music industry is ready. The JUNO Awards will take over Winnipeg in 2014, bringing with them JUNO Week celebrations, March 24-30, The Canadian Academy of Recording Arts and Sciences (CARAS) and broadcast partner CTV announced on October 4.

This will be the second time the JUNOS have landed in Winnipeg. In 2005, the festivities flooded venues across the city for JUNOFest; shut down Portage Avenue for a street party; and packed the MTS Centre with music fans, a veritable who’s who of industry, and marquee talent. Hometown roots darlings The Wailin’ Jennys, one of 10 nominated acts from Manitoba that year, were the pride of the province, winning their first of two JUNOS.

“We are thrilled to welcome the JUNO Awards back to Winnipeg,” said Sara Stasiuk, executive director of Manitoba Music. “Our province is known around the world as a hotbed of diverse musical talent that stands shoulder to shoulder with the best acts in the country. We’re excited to showcase our internationally-celebrated industry while putting on a great party for the rest of Canada.”

Manitoba artists have a strong history with The JUNO Awards, picking up over 200 nominations and over 50 wins since 1970 when The Guess Who helped put the local music scene on the map. The keystone province has produced several multiple-award winning acts, including Brandon-born virtuoso James Ehnes, Morden-born world music star Loreena McKennitt, pop songstress Chantal Kreviazuk, platinum-selling act Crash Test Dummies, beloved children’s legend Fred Penner, and, of course Burton Cummings and Randy Bachman, among many others.

In the last decade alone, local acts have garnered 15 awards and 69 nominations. Manitoba’s renowned roots scene has dominated the roots/traditional categories, landing 17 nods and five nearly consecutive wins, bookended by The Wailin’ Jennys in 2005 and 2012. Manitoba’s Aboriginal artists have picked up 14 nominations, including three nods for Eagle & Hawk and a win for Burnt – Project 1 in 2006. A winner in 2009, Portage la Prairie’s Doc Walker has six nominations in the country category in 10 years. In 2012, KEN mode won the first award in the new metal/hard music category. And that’s just to name a few.

Manitoba’s music industry has seen an exciting surge in activity in recent years with more independent artists working on the national and international stage, including U.S. and European tours; nods from the prestigious Polaris Music Prize; key label, management, and distribution deals; and lucrative sync placements in television, films, and games.

The 43rd annual JUNO Awards will broadcast on CTV from the MTS Centre on March 30, 2014. 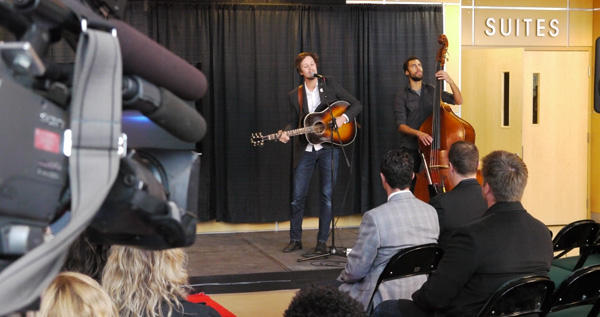 2011 JUNO Award nominee Del Barber performs at the announcement at the MTS Centre.