If patience is a virtue, Yes We Mystic’s band members must be hiding seraphic white robes under their button-ups and band-tees.

The Winnipeg-based art-rock group exudes the same steady calm found in hearts of the prairie farmers around their hometown. A necessary trait for anyone whose livelihood is dependent on enigmatic weather patterns and unpredictable forces; those that work the land and those that create music seem to have more in common than an affinity for denim.

Known to pour over a single new song for three or more months, main vocalist and guitar player Adam Fuhr explains how the band takes the winter to hunker down, hermit away the cold in its jam space, and study the budding tracks. The result is a rich, melancholic sound, perhaps in part to the violin and cello, played by Eric Ross and Jodi Plenert, respectively. The lineup is rounded out by Keegan Steele, who lends his multi-instrumental talents in the mandolin, synth, vibraphone and various percussion and vocal parts, as well as Jordon Ottenson, who drives the beat behind the skins.

Slow and steady songwriting aside, the five friends also display a certain perseverance and understanding simply in the fact that they have been making music together for five full years.

“There have been ups and downs and points in our history where you're not sure if it’s going to continue, to be honest,” recalls Fuhr. “But we’re here and looking back at five years, and for us it did get easier as time went on.”

While one of the more straining aspects of maintaining a positive band environment is having everyone’s expectations be on the same page, it’s this very conundrum that landed the group together in the first place.

Fuhr and Steele, the nucleus of Yes We Mystic, have been friends since their parents were making the playdates for them. Constantly engaging in various creative projects together, from films to theatre productions, it turned out that jamming with pals in the chilly basements of central Winnipeg struck a chord with both of them.

Enrolling in the CBC’s 2011 contest to find the best high school rock band in Manitoba (a segment aimed at encouraging local music), the group — at the time called Eeper Weeper — beat out crowds of eager young musicians to win the top spot. In typical dramatic high school fashion, band members split, some lost interest, some starting doing other projects, and some stopped playing music altogether. Only Fuhr and Steele remained, and with their next creative endeavour already buzzing in their heads, they used the Manitoba Music voucher in their prize package to kick start their next music group.

“It happened in the blink of an eye,” explains Fuhr, regarding the transition to Yes We Mystic. Assembling a stellar cast of friends, the group experienced a few smooth transitions before settling on its current lineup. “Everyone that is currently in the band we met through them being such talented musicians.”

Yes We Mystic’s pensive, skillfully-composed tunes have mystified audiences from showcases at NXNE in Toronto to M for Montréal and Winnipeg’s own indie music festival, Big Fun. In 2016, the band travelled across the pond for a series of spots on Manitoba Music’s market development showcases, performing at BreakOut West’s UK showcase in London, Brighton’s The Great Escape, Hamburg’s Reeperbahn Festival, and in Warsaw.

The bubbling success encouraged the group to release a full-length album, which was produced by Jace Lasek (The Besnard Lakes, Patrick Watson, Wolf Parade). Recorded in part at Lasek’s own Breakglass Studios in Montréal and the rest Winnipeg’s Private Ear Recording, the subsequent album, Forgiver, flows in the way that creative work only does when it has sat and thoughtfully stewed.

“Since I was about 15, I dreamed of releasing something on vinyl,” says Fuhr. “It was an exciting day when those test pressings came. [Vinyl] is how I consume music, so I couldn’t imagine not doing it that way.”

The band chose to work with Lasek after Fuhr and Plenert spent time sifting through Fuhr’s vinyl collection and discovered patterns in production credits on their favourite albums.

“We were making a pile of records that we wanted the production to sound like and when we searched through the names, [Lasek] was on a surprising amount of those records,” explains Fuhr. “We worked together and it was such a fantastic experience.”

While thoughtfulness and determination have contributed to Yes We Mystic’s perceived patience, it was the loss of their instruments that granted the heaviest test.

The band had spent the summer jet setting, playing in Brighton and London, then back to Canada to tour some dates, and heading back across the pond to play Hamburg, Warsaw, and a gig in Bremen.

“We didn’t know much about Bremen going in,” admits Fuhr, who recalled the German city having an endearingly dive-y Winnipeg vibe. “The show was packed and people were singing along to all of our songs. We couldn’t believe it, we were getting teary-eyed on stage. We had been feeling real far from home and it was one of the most memorable shows I’ve ever played.”

Departing from Europe with just enough time to polish up a new song before their fifth anniversary show, Yes We Mystic’s loads of gear got stuck in airport cargo bureaucracy. The bands months of patience paid off when the equipment arrived home in the nick of time, the very week of their big show.

With their instruments safely back on Canadian soil, the five-piece had minimal time to prep. Perhaps it was the relief of having their beloved guitars and drums returned, or the excitement of commemorating five years, but on November 11, 2016, Yes We Mystic played its fifth anniversary show at the West End Cultural Centre, a Winnipeg institution, to a packed house. The enigmatic “ups” Fuhr speaks of seem to have prevailed.

With the temperature dropping, Yes We Mystic plans on yet again retreating to their jam space to focus on creating. Investing the time to fine tune their new compositions, a new record will soon be on the horizon.

“We’ll be ducking out under the radar for the winter ‘cause well be working on new songs and building towards another record in a couple years,” says Fuhr. “It takes us a long time to write a record, so that’s where we’re starting off at.” 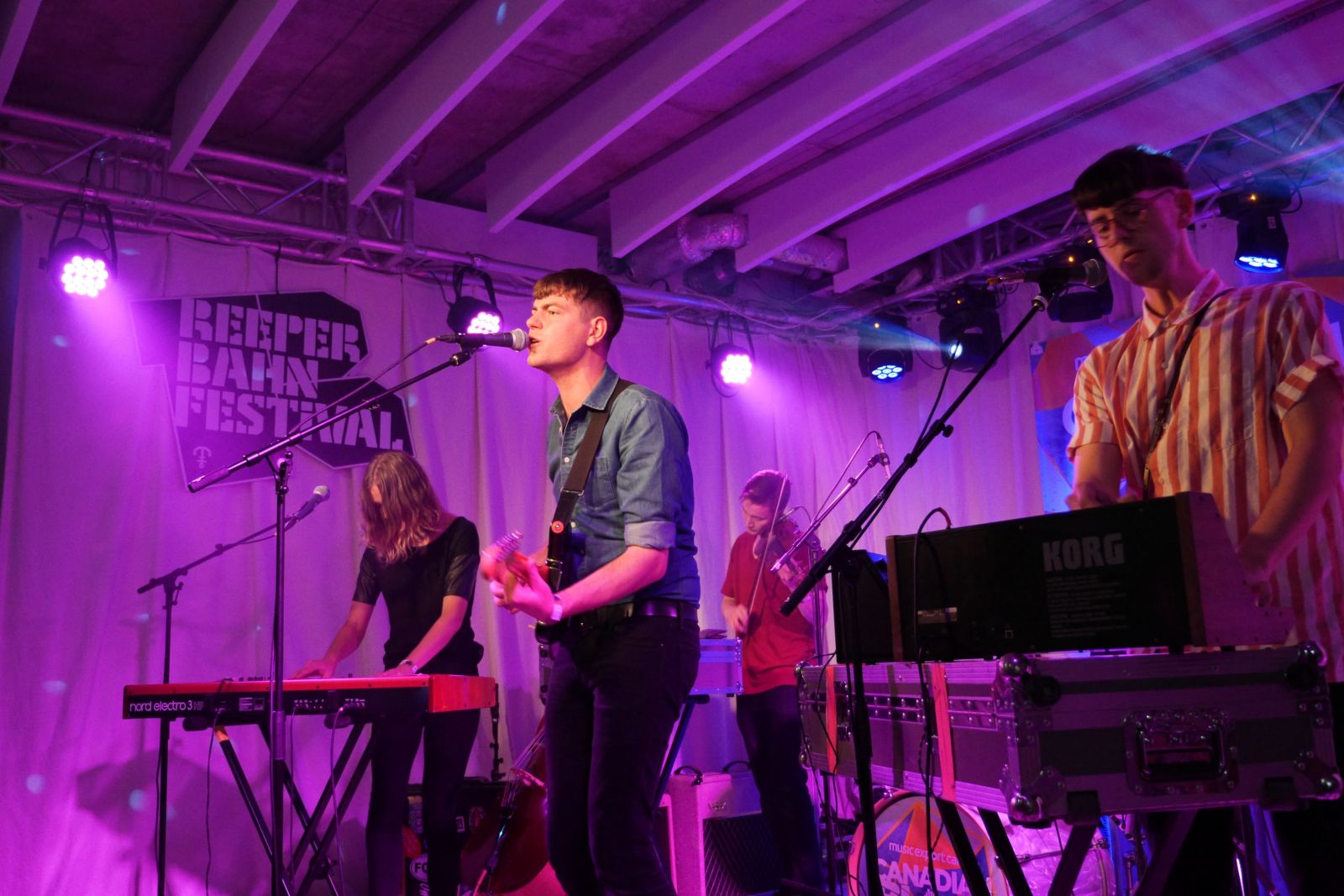 Navigating the music industry can be an intimidating task for a young musician.

Often at odds with some of the finer aspects of their instrument — let alone stage presence — contemplating the ins and outs of administrative work and project management is something that is often left on the jam space floor.

Offering incentives for emerging artists to connect with the business side of their careers can provide a sturdy and knowledgeable platform to move forward in their music work with confidence.

The CBC Manitoba competition focusing on Manitoba’s best high school band boosted local music awareness and sparked the interest of many up-and-coming artists. Four groups out of the 2011 contestants, including Fuhr and Steele, are still actively making music in Manitoba. The winners all received a one-year Manitoba Music membership, which offered access to a host of professional development resources, including one-on-one consults with staff when they needed info and help.

“Just starting out and having questions in those early days, it was good to have a resource that you can go to,” remembers Fuhr. “If you’re feeling stuck, they’ll help you.”

Yes We Mystic honed its craft, developed its sound, and made its plans, making leaps onto the showcase stage, including spots on Manitoba Music’s showcases at NXNE and M for Montreal in 2014 and at the Big Fun Festival in 2015. The band landed a video shoot with Manitoba Music’s Loft Sessions series, which offered pro quality live performance footage, an important component of an artist’s marketing initiatives. Band members took in some of the panels, networking, and mentor opportunities during January Music Meeting – drummer Jordon Ottenson even stepped in as a volunteer for the 2015 event. The band kept the energy going, hitting Manitoba Music’s annual autumn showcase in Toronto in 2015 before gearing up for coveted performance slots at Brighton’s The Great Escape, Hamburg’s Reeperbahn Festival, and a showcase in Warsaw, supported through the Market Access Program.

Along with using the momentum and the relationships developed at BreakOut West in Victoria in 2015, these overseas trips and the opportunity to perform for European agents, PR, festivals, and labels allowed the group to secure a PR rep in the U.K., a German booking agent, and connected the band with Devil Duck, who handled the distribution of Yes We Mystic’s debut album in Germany. The band has made the most of these showcasing opportunities and new business relationships, turning them into two European tours that have helped the group continue to build its presence and fanbase overseas. Having the opportunity to play in front of people that otherwise may not have been exposed to Yes We Mystic’s music provided the art-rock outfit with opportunities to tour.

While taking part in showcases, playing in front of individuals who might make an impact on one’s career, and networking with industry professionals is critical to success, having the ability to seek out a resource, where one can turn to with questions or for support, is vital.

“You might be tempted to play one or two showcases and call it quits ‘cause you’re not seeing results, but they encourage you and help you to keep going,” advises Fuhr. “Maybe someone just needs to see you twice.”