Some individuals feel a strong pull towards their purpose in life. William Prince is one of them.

Growing up on Peguis First Nation, Prince was surrounded by music. His home away from home was the church where his late father was the pastor. Eventually, choral and gospel music turned into Metallica riffs, which turned into an affinity for poetry and folkier, acoustic melodies. The soulful singer/songwriter has since blossomed from playing rural naves to bright stages in some of North America’s largest cities.

The ball started rolling with Earthly Days, Prince’s debut record, which was released at the West End Cultural Centre in December 2015. By July of 2016, Prince had a coveted in-between act on the main stage at the venerable Winnipeg Folk Festival. This was quickly followed by winning a Western Canadian Music Award for Aboriginal Artist of the Year. By the time he returned home with his hardware, he was signed to Paquin Entertainment.

But the whirlwind doesn’t stop there.

“It felt like a huge validation to my songwriting and for me as a performer and a writer to be acknowledged in a category outside of Indigenous music,” Prince explains. “People are quick to identify because of the struggles that affect First Nations people, so it’s nice to have a brighter spot to talk about, rather than the tragedies. It’s good to enter a whole new bracket of musical recognition and then it just reinforces what I am trying to do to uplift people.”

Using his growing recognition as a vehicle to inspire the people that he cares about, Prince fights the stereotype of the up-and-coming music star. Seven months ago, he became a father. Desiring to write music and tour for the rest of his life holds a whole new sort of pressure when you’re responsible for the life of another human being.

Despite the steadily growing success, he hasn’t lost sight of why he makes music in the first place. Since he was 15 years old, Prince was recording gospel records with his dad, traveling from church to church and playing every instrument he could get his hands on. Little did he know, he was paving the way for his future.

“I loved music and I knew I wanted that for myself,” Prince recalls. “It was something my dad instilled in me. There is so much more at work than just what I want. I feel as though there is a path laid out for me. And just look at the people who I have come to work with…”

From his management team, Nathalie Kleinschmit and Kara Swayze at Prairie Mix, to agent, Jeremy Giacomin at Paquin, Prince’s talent and warm nature have turned him into a magnet for like-minded folks desiring to promote good music.

But when it comes to Prince building up his music community, it all starts with Scott Nolan. The two met at an Idle No More fundraiser and instantly became friends. Music was without a doubt part of their friendship, but that definitely was not the limits of their connection. Five years into their friendship, Prince decided the time had come for him to demo a record.

Engineered and mixed by Jaime Sitar (Bif Naked, Randy Bachman), the record was a serendipitous meeting of three friends, and the results are, quite frankly, award-winning.

With names that used to just be letters on a poster quickly becoming friends and close collaborators, Prince was thrust into the music community full force. From the album release to showcases in Winnipeg, Ottawa, and Kansas City, Prince is motivated not solely on putting food in his baby’s belly, although that is of prime importance, but also on the experiences he can share with his audiences.

“For people to feel something from a performance and to share that with me is very rewarding, especially to share with people who are probably going through a lot of the same,” Prince says. “I think there is a bit of healing in that for me, to kind of voice that and be real. I think it’s easier with strangers in a sense. We form this connection, and then a lot of times those performances turn into the beginnings of more friendships and relationships and finding people who believe in what I’m doing.”

By sharing his lyrical, thought-provoking stories, Prince acts as a modern-day folk activist, informing listeners about his life and connecting with individuals who hold similar stories and ideals.

“You gotta pay some dues and I had no problems waiting on that,” Prince says. “To get invited to these events and to get advised that it will lead to more, it’s a nice confirmation that maybe people have been believing in me longer than I have.”

While in Nanaimo, BC in the summer of 2016, Prince was granted the opportunity to open for the legendary Buffy Sainte-Marie. To have a shared experience with one of the most important activists of our time opened up the notion of folk music community to a whole other level.

“If you’re a First Nations performer or artist, there are the stars in the sky that you compare your brightness to,” Prince expresses regarding Sainte-Marie. “Just to be in her presence, there was something cosmic about that.”

Up next, Prince is working on a new record, drafting up a manuscript of part confessions and part advice for his son. Complete with odes dedicated to his child to encapsulate the early years of his life, while also touching on the death of his father and the beginning of his professional music career and artistic growth.

“I’m kind of grieving and celebrating all at the same time,” Prince says. “It’s just amazing what is happening right now. I try to be aware and to always be grateful. You give thanks and you keep on having a reason to give thanks.”

William Prince’s strong commitment to sharing his music and creating community has allowed him to forge connections in the industry that go beyond business.

“The way music succeeds is based on friendship and a bit of the networking that comes with it,” Prince expresses. “That’s how you ‘make it’, it’s by expanding yourself to the right people. You grow every step of the way.”

Word of a certain soulful folk singer started to spread after Prince took part in the Manitoba Music's AMP Sessions video series in September 2015, where his “Bloom” video racked up over 13,500 views. From there, accessing various Manitoba Music programs – including the Market Access Program, Aboriginal Music Program, and professional development initiatives -- have helped both Prince and his team in getting his debut album, Earthly Days, out into the world.

After the release of Earthly Days, a domino effect kicked off. Building on the early momentum of his AMP session video, Prince performed a handful of local shows including a much talked about appearance at Festival du Voyageur. His performance at festival attracted the attention of manager Nathalie Kleinschmit, founder of Prairie Mix. Kleinschmit, together with Kara Swayze, has been working behind the scenes so the singer/songwriter can concentrate on his music.

“You gotta be dedicated to it for it to eventually work out in the sense of a business model,” Prince explains. “But at the same time, to create something that becomes valuable is something I had to learn to do as well.”

From performing under The Forks’ Canopy Stage during Manitoba Music’s showcase at APTN’s Aboriginal Day Live event to showcases at Folk Music Ontario in Ottawa and Folk Alliance International in Kansas City, Prince has made the most of the past year. Using industry-focused events to connect with publicists, labels, radio trackers, DJs, festival bookers, and music supervisors, has been key the rapid development of the singer’s career and the Market Access Program has helped him get there. Along with securing both management and an agent at these showcases, Prince was also able to parlay his appearances into a string of both Canadian and European festivals, along with tour dates that will keep him busy into 2018. For many folk music DJs attending Folk Alliance, this was their first opportunity to hear Prince live and the results  have seen the singer being added into stations across the U.S. and Canada.

The Market Access program also supported Prairie Mix to attend these events with Prince and provided Kleinschmit the opportunity to participate in organized business-to-business meetings that gave Prince and his team immediate access to all elements of the industry. From festival bookings to tour support offers and potential sync opportunities, these face-to-face meetings were also instrumental in moving his career forward in 2016.

One of the most crystallized paths to success would be after Prince performed at Manitoba Music’s pre-BreakOut West showcase for visiting industry from Belgium, the U.K. and Germany. At the event, Danny Kier of Sound Diplomacy (England) encouraged Prince to apply for The Great Escape. In May 2017, Prince will be showcasing at the renowned Brighton-based event. Other events lined up for the summer of 2017 include playing at the CBC Music Festival in Toronto, Mariposa Folk Festival, Regina Folk Festival, and Tonder Festival in Denmark.

By looking at the music industry as a community which can support and connect, Prince has fostered strong grounding to allow him to share his songs. Up next, Prince will be working on his sophomore album, another capsule of music that will expand his outreach.

“Now that there is expectation, it excites me. It motivates me again,” Prince says. “I don’t take it lightly that I get to be here off of a first record and a first appearance. I’m really thankful more than anything that people are putting their faith in me. I’m really touched by it.” 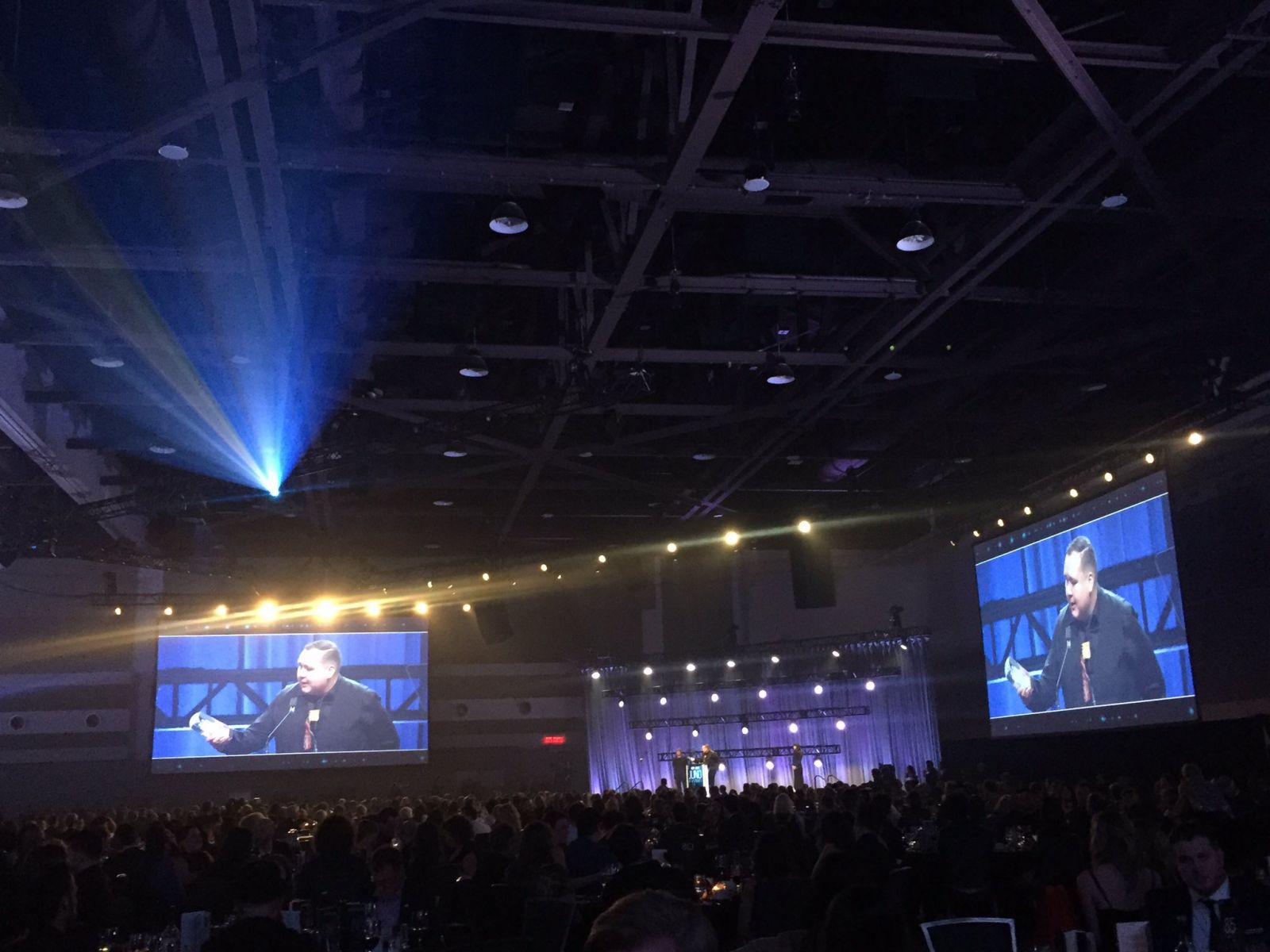