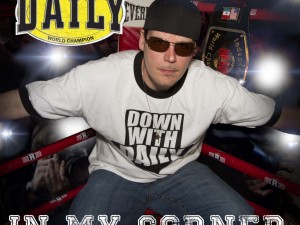 Daily - In My Corner

Hip Hop, Rap, Jazz, Electronica, Rock, Daily has experimented with them all. Building unique pieces of musical art, where the album becomes his canvas. Using all the genres in a kaleidoscope of conception. To tell the stories of his own struggles from start to finish. An artist that believes in the conceptual album, in the same vain as The Beatles -Sgt. Peppers Lonely Hearts Club Band or even Pink Floyd's - The Wall. Daily believes in interconnected stories in which the listener visualizes what they hear, in a theatrical experience from start to finish.

There are the Hip Hop, Rap and Club Jams you'd expect to hear from a Hip Hop artist, but all with Daily's own unique spin and vision which he brings to each song. Daily isn't trying to be the next Jay Z, 2 Chainz or Tupac. Daily is trying to be Daily, an independent artist that produces concept albums in which the listener is encouraged to visualize the music and interpret it into their own stories based around the life of Daily.

No Crews, No Labels, No Ass Kissing, just one man's unique interpretation of the way Hip Hop music should be produced, conceptualized and presented.

This is Daily's In My Corner.