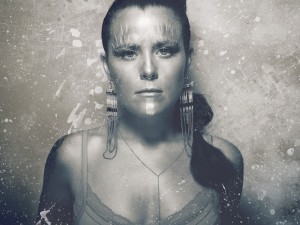 IsKwé's latest single "Nobody Knows" (produced by Juno nominees The Darcys) is an in-your-face anthem with a stark vocal performance and powerful beat. Poignant lyrics, "I won't be afraid" and "I won't let you look away anymore" show IsKwé's passion for creating music that is both sonically captivating and culturally relevant.

"Nobody Knows" forces the spotlight on the more the 1200 missing and murdered indigenous women in Canada. IsKwé (pronounced iss-KWAY), a Cree/Dené/Irish songstress, was compelled to give her voice to this important issue after watching her community come together in both strength and sadness after the murder of 15-year-old Tina Fontaine.  With "Nobody Knows", IsKwé wants to encourage others to speak up, not just for indigenous women, but for ALL women.

Called ‘One to Watch’ by The Grid TO and one of '10 Canadian Musicians You Need to Know’ by CBC Music, Iskwé’s cross-cultural aesthetic is as striking as her tripped-out blend of soul. Iskwé’s debut album weaves together her Irish and Cree/Dene roots with trip-hop beats, left-field R&B, and traces of piano pop (Think Esthero meets Alicia Keys).

Her debut record was nominated for Electronic/Dance Album of the Year at the 2014 Western Canadian Music Awards and single “Slack Jaw” was voted Regional Finalist in the 2014 CBC Searchlight Competition.

"Empowerment R&B and diva-in-the-making soul-pop swoops, from one of the coolest looking women in Canadian music. Ke$ha only wishes she could pull off this style." - Andrea Warner, CBC Music

"Iskwé's self-titled debut album is as beautifully written as it is executed. Her voice is both wonderfully smooth and commanding of attention. The smoke-filled jazz room feel is a breath of fresh air in a stagnant Canadian pop scene." - Dee Jay NDN, A Tribe Called Red.

The Winnipeg-bred, Canada-based singer-songwriter was recently nominated for a 2014 Western Canadian Music Award for Electronic/Dance Recording of the Year.