In the 1970s, a teenager in Morden, Manitoba taught herself to play a guitar left-handed and upside down. Mitch Podolak, founder and then-current artistic director of the Winnipeg Folk Festival, brought her in to assist legendary blues singer and left-handed guitar pioneer, Elizabeth “Libba” Cotton, with carrying gear, getting food, and anything else she needed during her stay. Around that time, he also invited her to perform at the festival.

That teenager was Loreena McKennitt and the rest, as they say, is music history. 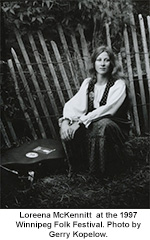 McKennitt went on to establish one of the most successful independent music careers, winningnumerous awards and accolades, honoured with the Order of Canada and the Order of Manitoba, and selling over 14 million albums worldwide. She introduced the world to an exciting new blend of traditional and world music. McKennitt maintained fierce and intuitive control of her business, founding her own label, and revolutionizing the independent music world. She also graced Winnipeg Folk Festival stages in four different years and was awarded its inaugural Artistic Achievement Award in 2004. McKennitt will perform at a Folk Fest-produced concert at Winnipeg's Centennial Concert Hall on August 9.

“It was and continues to be an extremely nurturing environment with its feet firmly on the ground,” says McKennitt of the Winnipeg Folk Festival. “Over the years I would come to play there off and on, and I would always feel there was a quality to it which was like ‘touching the stone’ something meaningful and even powerful, which began many years ago and to which one can tap into even today. It is truly a wonderfully rich and enriching environment, for performers, audience and volunteers alike.”

McKennitt deserves all credit for her success, but there is also something to be said for having one of the world’s biggest, oldest, and most respected folk music festivals in your own backyard. Over its 40-year history, the Winnipeg Folk Festival has inspired countless musicians, offering them the unique opportunity to witness and connect with music legends and innovators. The simple act of sitting at a workshop stage or picking up the guitar at the festival campground has changed the lives of many aspiring Manitoba musicians.

“I was a budding singer/songwriter and my boyfriend at the time bought me a copy of Performing Songwriter from the Festival Music Store,” remembers Nicky Mehta, co-founder of two-time Juno Award-winning trio The Wailin’ Jennys, of her first Folk Fest experience. “I read that magazine all day in between workshops and then watched in awe as Geoffrey Oryema took to the Main Stage under a brilliant orange prairie sunset. It was pure magic and sealed my fate.”

McKennitt and Mehta are just the tip of the musical iceberg. Since its inception, Folk Fest has featured over 170 Manitoba performers in just about every genre imaginable. Some of this province’s most renowned artists have played in front of festival-goers, connecting them to new fans and new musical friends, and offering fundamental, life-shaping experiences that have helped to build long-lasting careers.

“The Winnipeg Folk Festival was the very first large festival stage of my now 25 years in the music industry,” says Mira Black, who first took the stage in 1991 with her band Acoustically Inclined. “We were a band of rag tag kids who busked around the city with a dream of positively affecting our community with our music. The exposure to other great artists backstage connected us to a musical circle outside our own as well as inspired and motivated our art.”

“I remember fondly singing a tweener on the Main Stage while moths and mosquitoes zipped by, looking over a sea of smiling faces as the sun set into the prairie sky,” muses Chic Gamine’s Andrina Turenne of her first Folk Fest performance, then with funk outfit Rudimental, when she was 18. “I could feel the history of it all around me and I felt so proud to be a part of such a wonderful community.”

Some of the very performers who motivated new generations of artists have been equally inspired during their times at the festival.

“As a young performer I remember being in the presence of great talents from Pete Seeger, Dave Van Ronk to Steve Goodman and k.d. lang. Listening and learning from such as these can help creativity grow and develop and find its place in a world that needs the voices of the people. Believing in yourself and your talent is a lifelong process, and I see the Winnipeg Folk Festival as a catalyst in the process,” says music legend Fred Penner, a nine-time festival performer. 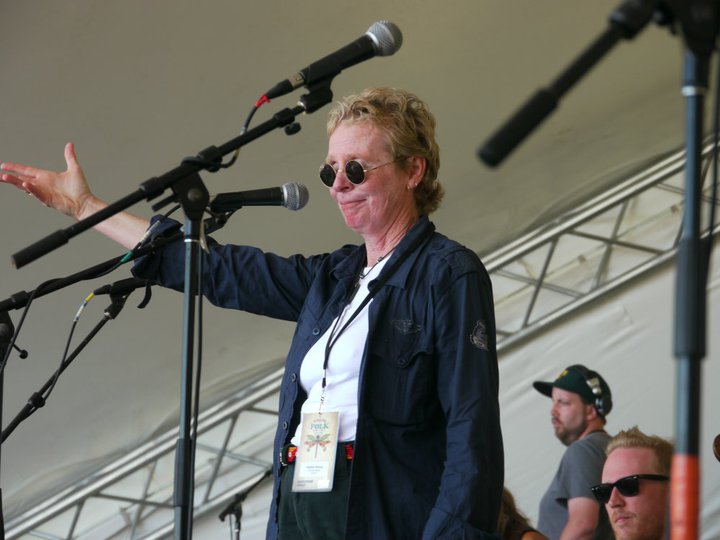 Heather Bishop, another legendary figure on the national music landscape, regards her 1976 Folk Fest performance as her first big break: “Although I had played other festivals, this was the lynch pin to opening all the doors to the major folk festivals in Canada and the USA - and indeed, all those doors swung open for me.”

Renowned children’s performer Al Simmons, who has appeared a dozen times, credits his time at Folk Fest for helping him to hone his performance skills. “The Winnipeg Folk Festival has been my training ground from when I first performed there in 1979. It's where I honed my performance skills and learned how to be an emcee. I remember standing backstage, while I was emceeing the Main Stage, watching and learning from the pros.”

Artists aren’t the only ones getting career inspiration from Folk Fest. Many of those who make up the business side of music got their first taste of the industry through the festival. Sara Stasiuk, Manitoba Music’s executive director, traces her love of working with artists to growing up around the festival, as well as the experience and connections gained through volunteering.

“The Winnipeg Folk Festival has been in the background of my life since childhood - first as an attendee then as a volunteer then eventually as stage manager of the Main Stage. Being a part of the festival gave me my first -- and a lasting -- need to be involved with bands on stage.”

Stasiuk can also trace the strength and vibrancy of Manitoba’s folk and roots community, which has spawned five Juno Award winners and 17 nominations in the last decade alone, back the festival.

“Having an outstanding festival right in our backyard has been instrumental in shaping our local scene -- having exposure to the preeminent international artists and new sounds has inspired countless local artists and has demonstrated where the bar is. As a result, our folk and roots scene is well-known to be among the best in the world.”

The festival itself recognizes, if humbly, its role in developing Manitoba's music community. Moreover, it understands the fundamental reciprocal relationship it has with the artists.

“Manitoba artists play an integral role in at the Winnipeg Folk Festival,” says the festival’s artistic director, Chris Frayer. “They are not only on par with the visiting artists in terms of skills and professionalism but since many of them have been to the festival several times as audience members they also play a key ambassador role and a lead role when it comes to workshops. I would like to think that the festival plays at least a small role in helping to develop emerging Manitoba artists.”

The festival celebrates homegrown talent once again with the popular Manitoba artists’ workshop, which has drawn huge crowds in recent years. Taking its name from a lyric from The Weakerthans’ “Left and Leaving”, Strangers Whose Faces I Know features Del Barber, Nathan Rogers, Oh My Darling, The JD Edwards Band, and The Magnificent 7s . Presented by Manitoba Music and Manitoba Film & Music, the workshop takes over Big Bluestem on Friday, July 12 at 12:45 p.m.

Five locals will also hit the Main Stage this year, including Oh My Darling’s festival-opening set on July 10; The Magnificent 7s and Del Barber on July 11; Nathan Rogers’ tribute to his late father, Stan Rogers, on July 12; and The JD Edwards Band on July 14.

The Winnipeg Folk Festival is about more than just five days in July. As one of Manitoba's largest arts organizations, it works year-round offering programming. Centred largely around its downtown venue, The Folk Exchange, the festival offers concerts and regular open mic nights as well as workshops and other training. It also runs the specialized training through its Folk Music Camp every year.

“We grew up there, with our families and friends, the classic sleep-depriving jams in the campground as teens and beyond, inspiration as audience members from countless great artists,” says Kuzina, who will be one of this year’s mentors. “From late night jams, Young Performer Program jitters, bursary receivers for the Folk Camp, and now as mentors and Main Stage performers, we are humbled and overflowing with gratitude for the Folk Fest, they have truly guided and supported us on this crazy artistic career path. What an amazing dream it has all been.”